Cart Donate
Home Ep. 1: Won’t You Be My Neighbor? 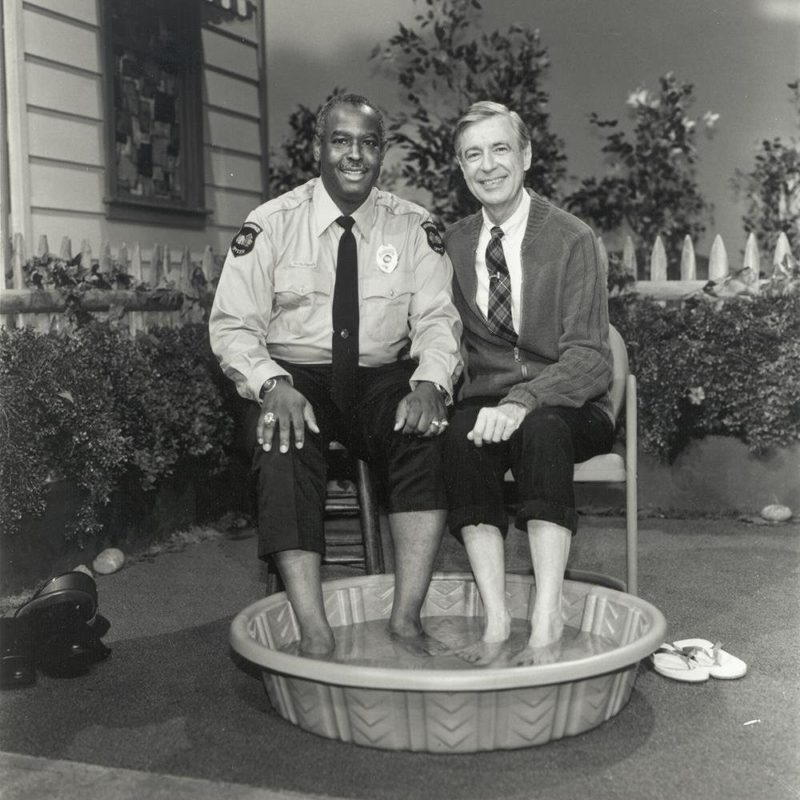 This sermon was originally delivered to the congregation of Harmony, a Unitarian Universalist Community, on January 1, 2017. It is published here with permission from the writer, with all rights reserved.

When I was a little girl, I loved Mr. Rogers. I’m sure many of you remember his long-running series, “Mr. Rogers’ Neighborhood,” which aired on PBS from 1968 until 2001. I have such fond early childhood memories of Trolley, jing-a-linging his way to the Neighborhood of Make-Believe, populated with slightly bizarre puppet people like King Friday, Prince Tuesday, Daniel Tiger, and Lady Elaine Fairchilde.

Perhaps the main thing that drew me to Mr. Rogers was his gentle kindness with each person he encountered, and his slow, deliberate way of going about everyday activities, such as putting on his shoes or hanging up his sweater. I guess he reminded me of my own dad, who talks quietly and takes his time. But Mr. Rogers also had this mesmerizing quality of total, loving acceptance. I mean, at the end of each episode, he looked right at me, and said to me, with total sincerity:

“You’ve made this day a special day just by being you. You are the only person like you in this whole world. And people can like you just because you’re you.”

I wasn’t the only one who felt this way…

Invoking the spirit of Mr. Rogers

In the aftermath of the presidential election, with all its vitriol, divisiveness, open hostility, and pervasive, intense fear, I had that wind-knocked-out-of-me feeling. Followed by the daze you often experience after a major shock, like “Is this really happening?” In order to emerge from that daze, and to move forward in hope rather than fall back into a mire of despair, I had to find something solid to hold onto.

Who should come to mind, but Mr. Rogers?

His words were circulated quite a bit after 9/11, and after other deadly disasters that happened since:

“For me, as for all children, the world could have come to seem a scary place to live. But I felt secure with my parents, and they let me know that we were safely together whenever I showed concern about accounts of alarming events in the world.

“There was something else my mother did that I’ve always remembered: ‘Always look for the helpers,’ she’d tell me. ‘There’s always someone who is trying to help.’ I did, and I came to see that the world is full of doctors and nurses, police and firemen, volunteers, neighbors and friends who are ready to jump in to help when things go wrong.”

I decided to grab onto Mr. Rogers’ notions as a way of pulling myself out of the dark, swirling, scary place.

The concept of “neighbor” across faiths

As a kid, I had no idea Mr. Rogers was an ordained Presbyterian minister. Turns out, his TV show was his ministry. Pretty sneaky, right? But also, pretty effective in spreading the core message of Christianity to the masses.

“Mister Rogers’ Neighborhood” helped young viewers process stress incurred during intense periods of cultural upheaval. When it would have been easy to demonize villains, Rogers instead forced viewers to tussle with a question Jesus himself was asked in the gospel of Luke: “Who is my neighbor?”

Mr. Rogers’ answer: “The underlying message of the Neighborhood is that if somebody cares about you, it’s possible that you’ll care about others. ‘You are special, and so is your neighbor’—that part is essential: that you’re not the only special person in the world. The person you happen to be with at the moment is loved, too.”

Guess what? This whole “love thy neighbor” thing isn’t just a Christian idea. It’s also woven into the seven principles of Unitarian Universalism. See also: Judaism, Islam, Hinduism … well, you see the pattern here. A higher calling to get to know and care for our neighbors can be found across all major religions.

Verse 31 “The second is this: ‘You shall love your neighbor as yourself.’ There is no other commandment greater than these.”

You shall neither take revenge from nor bear a grudge against the members of your people; you shall love your neighbor as yourself. I am the Lord.

Quran 4:36
“Worship God and join none with Him in worship, and do good to parents, kinsfolk, orphans, the poor, the neighbour who is near of kin, the neighbour who is a stranger, the companion by your side, the wayfarer (you meet)…  Verily, God does not like such as are proud and boastful.”

Anusasana Parva, Section CXIII, Verse 8
By making dharma (right conduct) your main focus, treat others as you treat yourself.

Yet we humans tend to put up fences, of both physical and invisible varieties, between us and our neighbors. At best, such barriers create lack of awareness and understanding of each other’s traditions and values. At worst, they can lead to bias, prejudice, fear, hatred, and ultimately violence.

One year ago, an interfaith coalition of 15 civil rights and faith-based organizations launched a national initiative called Know Your Neighbor at a White House meeting on religious pluralism.

The idea was to promote inclusion, freedom, respect, and cooperation among people of different faiths.

Personal transformative experiences with the “other”

I don’t think any of us sets out to exclude, ignore, or even hate our neighbors who seem different from us. More commonly, we unconsciously pick up biased attitudes and social norms from a young age, influenced by our families of origin, religious and educational institutions, classmates and friends, circumstances, media, you name it.

When I reflect on my own life, I find many instances when my social programming was challenged by personal relationships.

While growing up, I had no clue why some boys I’d see in school wore their hair up in turbans and, in high school at least, sported thick beards. Then, one of these boys happened to be in my senior high school English class. During that year, I got to know to him, and learned that he was a Sikh, a religion originating in northern India. He wore the turban and beard because he had been baptized and adhered to the Sikh code of not cutting his hair. I also learned he was quite the smartass, frequently cracking jokes in class discussions, and a pretty cool cat.

A couple of years later while attending Miami University, I found out that one of my feminist mentors—who was director of the school’s women’s center at the time—practiced Wicca. Yes, she was a witch. Prior to knowing her, I had only the cackling, broom-riding witches of fairy tales and movies as a point of reference. Pretty ridiculous. Now, I had a real, live person, a social activist whom I respected and liked very much, to help round out my perspective on modern Paganism.

Fast forward to 2002, when I married a man who happens to be multiracial. We’ll be celebrating our 15-year wedding anniversary this April, and I can honestly say I’m still learning just how profoundly different life can be for a non-white person in this country. Before I knew and loved Jay, I was oblivious to much of the racism people of color encounter. Over the years, he has helped me see beyond my veil of “white privilege,” and begin to grasp just how pervasive racism is in our society.

I could go on and on, recounting the many individuals who have come into my life as “others,” and ultimately helped me realize we have more in common than I thought.

A recent “Saturday Night Live” skit beautifully illustrates the point that sometimes our preconceptions about “others” are surprisingly inaccurate. That all we need is to get to know someone to understand that we’re a lot more alike than we initially thought.

I’m the kind of learner who needs to see or hear examples before the light bulb comes on. And so with this idea of channeling Mr. Rogers to heal the world, I looked for stories of what other people have done. I don’t have time to share all of them now, and I only scratched the surface of what’s out there, but here are a few examples I found inspiring:

To sum up: Help a neighbor in a jam. Bring food. Invite someone to play. Put up welcome signs. Have lunch. Pretty doable.

Listen to what Elizabeth Lesser said recently about this personal approach to reconciliation:

“It’s rare that you have a conflict and two people or two groups who are equally mature in their desire or capacity to get there. That doesn’t mean it can’t happen. What it means is that one person has to take the lead, has to be bigger. I call that kind of person the new first responder. The person who takes the first step in a conflict toward the other, those are brave people.”

Doesn’t this sound a lot like what Mr. Rogers’ mother talked about? “Always look for the helpers…”

A big idea for Harmony

In my quest for a positive way forward in 2017, I realized the most natural place to start is right here. Harmony. It’s in the name of our church, for Pete’s sake! Here we are, a group of neighbors who all believe in the seven UU principles. We have a meeting space to call home. We have minds that think, hearts that love, and hands that are ready to serve.

Why don’t we work together to make Harmony known as a welcoming neighborhood gathering place for respectful, open dialogue and peaceful bridge-building?

William Ury, who literally wrote the book on negotiation techniques, Getting to Yes, said:

“The secret to peace is us. It’s us who act as a surrounding community around anyconflict who can play a constructive role. Because if you think about it, normally when we think of conflict when we describe it, there’s always two sides. You know, it’s Arabs versus Israelis, labor versus management, husband versus wife, Republicans versus Democrats, but what we don’t often see is that there’s always a third side. And the third side of the conflict is us. It’s the surrounding community. It’s the friends, the allies, the family members, the neighbors. And we can play an incredibly constructive role.

Action items: Be My Neighbor

If we are the “third side,” what kind of actions could we take this year to start making more of our neighbors feel included and loved?

I have some thoughts:

Let’s look for ways to incorporate this neighborly approach to what we already do at Harmony. Invite special guests to tell their stories at our regular Sunday services. I’ve already started making a list of sermon topics and reaching out to some possible speakers, such as the Imam from the Islamic Center of Mason, the director of RefugeeConnect, the founder of May We Help, and others.

I know Harmony member Sharon Bodmer is looking to set up visits to other churches on the second Sunday of each month. And Ashley Bauman wants to expand our social justice activism to help protect and welcome our neighbors who are vulnerable and at risk, particularly those experiencing oppression, hatred, and violence. Kif Corcoran said the Islamic Center of Greater Cincinnati in West Chester is holding an open house/tour of their mosque on January 14—anyone want to join her family for the tour?

Some other action items to consider:

I care about the whole. I think we all do. If you want to help me turn this vision into a reality, of making Harmony a hub of peace in our neighborhood, send me an email at susanwennerjackson@gmail.com. Join me in making 2017 a year of healing and hope, of being the change we want to see in the world.  ?“Please won’t you be my neighbor?”?