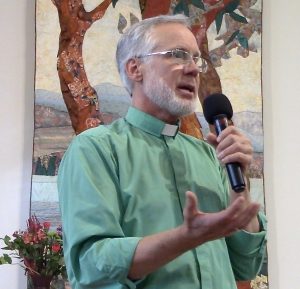 On Sunday, May 16, guest speaker Rev. Michael Dowd will deliver a sermon on “The Purpose of Religion and Necessity of Science.” Since April 2002, Michael and his wife (UU science writer and fellow climate activist Connie Barlow) have traveled North America delivering talks in some 500 UU congregations, summer camps, and minister retreats, as well as for other religious and secular groups. Their pro-science ministry was featured as the cover story of our national membership magazine, UU World, in the spring of 2006. They’ve also been featured in The New York Times, LA Times, Washington Post, and Discover Magazine, and on television nationally: on CNN, ABC News, and even FOX News.

We will conduct this service virtually via Zoom. If you’d like to join us on Sunday, just email us at info@harmonyuu.org and we’ll send you a link for our online Sunday Service.