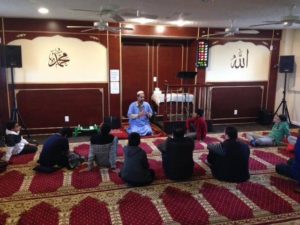 This sermon, “Our Muslim Neighbors,” was originally delivered to the congregation of Harmony, a Unitarian Universalist Community, on February 19, 2017. It is published here with permission from the writer, with all rights reserved.

For this brief introduction to Islam and Muslims, let’s begin with a few definitions. Islam can be defined as “peace through submission to God.” Muslim refers to “one who submits to God.” And the Arabic word Salaam simply means “peace.”

We believe that when everyone follow the laws of our creator willingly, then there is peace for self and everyone.

The beliefs of our faith are defined by these six Articles of Faith, or what is called Iman.

We believe God, or Allah, is the Creator while everything else is His creation. He alone has the right to be worshiped and none share His divinity. He is perfect in His names and attributes. For example, The Most Merciful, The Forgiving, The Just, The All-Seeing and Hearing, etc.

Other functions of Angels: record deeds, send rain, carry the soul, worship God, convey revelations to Prophets, record each person’s deeds, support the righteous when God so decrees, and collect the souls of the dying.

Prophets were sent to every nation to teach that God alone should be worshiped, and to enjoin good and forbid evil.

Who were the Prophets? Twenty-five Prophets are mentioned by name in the Quran, including: Adam, Noah, David, Solomon, Abraham, Jacob, Joseph, Moses, John, and Jesus. (May Peace Be Upon Them All.)

Does it makes sense for teacher to give a book and then test you without explaining it to you? God is merciful, so he has sent Prophets to practically demonstrate how to live life according to His will.

Muhammad (May Peace and Blessings be Upon Him)

Muhammad was respectable and trustworthy and a descendant of Abraham. He received his first revelation from the angel Gabriel when he was 40 and the revelation continued for 23 years. He was the last Prophet to confirm the message of previous Prophets and to complete the message for later generations. Every little detail of his life has been recorded and preserved.

4. Belief in the Books

Muslims believe that the following scriptures were the divine words of God in their original form, but through time and translation, parts may have been changed or lost:

The Quran is considered the eternal miracle of Islam preserved through writing. During the period of over 1,400 years since the Quran was revealed, not a single letter was changed. We consider it to be the divine speech of God, the final revelation of God, and a universal message to all of humanity.

5. Belief in the Day of Judgment

The purpose of life is to strive for a better afterlife. All souls will be resurrected and the world as we know it will be destroyed. Deeds will be weighed, with reward and punishment dispensed accordingly. To be successful on the Day of Judgment, one needs a balance between hope of forgiveness and fear of accountability. After all, God does not want to punish us.

6. Belief in the Divine Decree

Everything, good or bad, pleasure or pain, comes from God and is a test. No one can help you or harm you except by the will of God. Everyone has a free will and each person will be accountable for exercising it.

Beliefs are incomplete without actions, while Islam is a complete way of life. Morals are part of good behavior. We can liberate ourselves and achieve peace and happiness by changing from being a slave of thousand masters to one master. This belief changes the way we look at the events around us.

Faith has no meaning with out its impact on action. For example, someone says “I believe in education,” but does not even enroll in school. Enrollment is similar to taking shahada. Enrollment in school itself is not enough—we need to attend classes, too. Prayer is the equivalent of attending classes.

There is no god but God

& Muhammad is the Messenger of God

Every Muslim is required to pray 5 times a day, and prayer is considered the highest form of worship. During prayer, Muslims face towards Mecca and recite verses from the Quran. Prayers can be led in congregation by an Imam (religious leader).

Du’a is a way to ask Allah for mercy, life struggles, and for the betterment of yourself and others in this life and the next.

Every able Muslim must perform a pilgrimage to Mecca at least once in their lifetime. Kaaba is an empty cube built by Abraham and his son Ishmael. These rituals date back to the time of Abraham, and following them absolves our sins.

Zakah means purification. If a Muslim is able, he or she must give away 2.5% of their excess wealth each year to the poor. Giving charity reminds Muslims that what they own belongs to God, not them.

Fasting means abstaining from food, water, and sexual intercourse from sunrise to sunset during the month of Ramadan, the 9th month in the Islamic Calendar. We do this to appreciate our blessings, renew our sympathy for the poor, and bring about a spiritual reawakening within.

Throughout the world, the Muslim population is highest in the Asian Pacific countries (62%), followed by the Middle East/North Africa (20%) and Sub-Saharan Africa (15%), according to PewForum.org. About 7 million Muslims live in the United States.

The Angel Gabriel came to Mary and told her she would give birth to a son.

As an infant Jesus spoke to defend his mother and said: “Indeed I am a servant of God: He has given me the scripture (the Gospel) and made me a prophet; And He has made me blessed where ever I be, and has commanded me prayer and charity as long as I live; and to be kind to my Mother, and not arrogant or miserable; and peace is on me the day I was born, the day I die, and the day I will be raised (again) to life!” (Quran 19:30-33)

Here are 10 things you can do for greater awareness and acceptance of our Muslim neighbors (adapted from this Islamic Center of Greater Cincinnati handout):

Our Muslim Neighbors from Harmony, a Unitarian Universalist Congregation

Our guest speaker, Shaykh Aiyub Muhammad Hansbhai, is currently serving as Imam at the Islamic Center of Mason. He has more than two decades of experience as an ‘Aalim (scholar), Hafiz (one who memorized and can recite the entire Quran), masjid Imam, teacher, community guidance counselor and prison chaplain. He currently lives in West Chester with his wife, daughter, and sons.